Submitting your information,
this may take a few seconds...
ABOUT JACK: 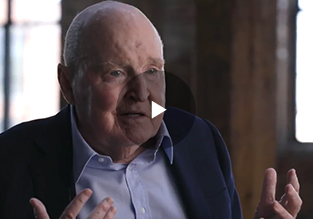 Named “Manager of the Century” by Fortune magazine and coined “The CEO of CEOs” in Forbes' 100 Greatest Business Minds feature, Jack Welch was one of the world’s most respected and celebrated CEOs. He left a legacy built on his unmatched track record of success, enormous love of people, fierce passion for winning, and unbridled desire to change the world for the better. Using his proven management practices as a blueprint, JWMI students learn how to win in business.

OTHER BUSINESS SCHOOLS STUDY GREAT LEADERS.
OURS WAS BUILT BY ONE.

Jack Welch was one of the world’s top business minds and was deeply engaged in every aspect of the JWMI program. His influence spans the curriculum, the faculty, the students, and the administration. Jack brought over 50 years of leadership expertise and a passion for education to JWMI. In addition, he brought valuable insights from the companies and business leaders he consulted with around the world, a unique perspective for JWMI students. Jack was instrumental in providing the expertise in sharing what companies need in the workplace and the education students receive. Jack’s vision and the curriculum foundation he built ensure that students are learning and applying every day.

His leadership was a tremendous asset to our courses, but most importantly, to our students, who are now the legacy for his winning business principles.

While there may be many opportunities to review Jack Welch case studies at other schools, no other school was built by one of the greatest CEOs of all time.

Over my long career, I perfected a proven methodology for winning, one founded on the belief that companies win and careers flourish when people are continually learning.

Born to a working-class family in Salem, Massachusetts, Jack attended the University of Massachusetts and received his Ph.D. in Chemical Engineering from the University of Illinois. He joined GE at age 24, worked his way up through many divisions, and was named its CEO in 1981 at the age of 45. In his 21 years as CEO, Jack transformed GE into the world's most admired and successful company with his innovative management techniques. Revenues grew five-fold, from $25 billion to $130 billion, income grew ten-fold, from $1.5 billion to $15 billion, and the company's market capitalization had a 30-fold increase of more than $400 billion. His achievements are considered epic, and, as a result, thousands of companies around the world have adopted the Welch Way.

After retiring from GE in 2001, Jack Welch was even more active in business. He wrote three best-selling business books, Jack: Straight from the Gut, Winning and The Real-Life MBA. He participated in managing numerous companies as part of a private equity group, and for four years wrote an immensely popular weekly column for Bloomberg Businessweek magazine. He was a fixture on TV as a popular business commentator.

Jack Welch was always defined by his zealous love of teaching and commitment to building leaders. At GE, he created the world's best corporate training center and regularly taught there himself. Later, he taught a popular course as a visiting professor at MIT's Sloan School of Management, and he regularly taught seminars to CEOs and senior executives around the world.