A Spirited MBA Idea: From Science Lab to Rum Brand, the Launch of Rock Sound® Rum
Prev Next
Search

Joel Lackovich was already well accomplished before beginning his Jack Welch MBA journey. He works for New England Biolabs, a global leader in the life sciences industry, and holds a Master’s degree in Biotechnology and a B.S. in Microbiology. The flexibility of the Jack Welch Management Institute’s online MBA program provided him the opportunity to add critical leadership and business principles to his toolbox. And it was at JWMI that he conceptualized and grew his next great idea… Rock Sound® Rum.

Rock Sound® Rum celebrated the launch of their new brand this month. Originally scheduled to launch at this year’s South by Southwest Festival (SXSW), Joel and his team had to quickly pivot to find a new way to launch during the unprecedented times of a global pandemic.

Joel shares how his experiences in the JWMI program played a key role in his entrepreneurial journey from the science lab to rum brand partner.

What does Rock Sound® Rum bring to the market?

Rum was America’s first spirit; it was here before whiskey, before vodka, and before tequila. But the cost to produce it from sugarcane became costly, and so rum fell in popularity. However, rum is making a comeback, specifically, light rum which can be used in many different cocktails. At Rock Sound® Rum, we believe backyard parties and vacation vibes should be possible for every person of legal drinking age, every day of the week. And when those occasions occur… Rock Sound® Rum should be the spirit of choice. Our rum captures the best flavors of summer—key lime, pineapple, grapefruit, and smoked coconut—and bottles them up for cocktail-making ease. We pay a little homage to our hometown of Austin with our smoked coconut and original dark rum varieties, which have subtle notes of smoked mesquite, a popular wood here in Texas.

How did you know you had a winning idea in Rock Sound® Rum?

It came down to five factors:

How did your science-based background aid you in the evolution of Rock Sound® Rum?

In 2018, while enjoying some R&R with my wife and our four children, I was having a rum cocktail, and I had a crazy idea that I could craft a rum that could make a significant contribution to the rum industry. Rum has always been one of my favorite spirits. Using my knowledge from my science degrees, I started researching some of the most iconic rum cocktails. To my knowledge, no one had ever 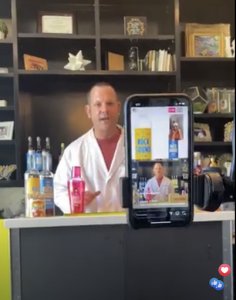 taken a white paper approach to understand the science behind a cocktail. The output of this research earned publication in Got Rum? Magazine, the leading magazine for rum in the world.

As a featured writer for the magazine, I began to share the biochemical and physical properties of various rum cocktails. The evolution of many cocktails is no mere accident, and I share what makes each cocktail unique and often dispel some myths, including those around nutrition, specifically that rum cocktails are unhealthy and loaded with calories, carbohydrates, and sugar. My column has gained in popularity; through my research and writing, I hope that readers become even more personally connected to their favorite rum cocktail and learn some interesting facts along the way.

You were a JWMI student when you conceptualized Rock Sound® Rum. Was there a class that helped drive the idea?

The rum business was just in its idea infancy stage when I began New Business Ventures & Entrepreneurship with Professor Dr. Ed Vengrouskie. I had the idea of a rum business in the back of my mind, but the timing was never right. At the same time, I was starting this class, my wife, a successful retired CEO, and I had just discussed embarking on a new project together.

All the pieces started to come together within this class, including the fact that Ed had spent a large amount of his career focused on building brands, specifically around the adult beverage market. He was a thought leader and influencer on this topic, and I knew he could provide insight and mentorship as the idea evolved. One of our first tasks was laying out the business plan for an entrepreneurial idea. I wanted to use the rum business but as Austin is a very competitive drinking city, I was nervous about putting my business plan out into the world. So after speaking with my business partners and Ed, I decided to complete a business plan for a restaurant instead. Since the spirits industry sells into restaurants and bars, this exercise gave me insight into my customer and the product more than I would have initially thought. I was able to structure a strategic plan to approach restaurants and bars in placing our product. Ed was encouraging throughout the evolution of the project.

One of the best pieces of advice I could give to any new Jack Welch MBA student would be to interact with the faculty as much as possible. They are all very knowledgeable and motivated to help you succeed. I am excited to share with Ed one of the first bottles of rum that comes off the line!

When you look back at your JWMI MBA journey, now as an entrepreneur who successfully launched a new brand, what is one takeaway you can share about the program?

The most valuable takeaway from the program that I carry with me in my new venture is that anything is possible in business. JWMI’s culture and curriculum provide a massive boost to one’s self-confidence. JWMI introduced and reinforced business tools, which I feel will help me be successful in any industry.

I practice and apply the knowledge and learnings from the courses to my professional life and personal life every day. Whether it’s candor, leading meetings, or even communication skills, there are so many continual opportunities to sharpen the business acumen pencil and live the JWMI program principles daily.

For example, understanding and responding to different emotional intelligence (EQ) profiles is a tool that I implement daily. Recognizing how someone will react to an idea is critical as you work to spread influence. Being aware of the EQ of those I interact with, whether a client, partner or consultant, has allowed me to be more mindful in my communications with others, and it has also led to more efficient and productive meetings.

What advice can you share for other students or alumni thinking of starting a business? What do you wish you knew before embarking on this entrepreneurial journey?

Before we started Rock Sound® Rum, we met and spoke with as many people as possible in the industry or affiliated with the industry. Our goal was to understand the business from A to Z before making the jump. Even then, there is still more to learn; in fact, we learn something new every day.

My advice to others who are thinking of starting a business is that you need to be comfortable with knowing that you don’t know everything. You can’t do it alone. It is critical to form a team of experts to prepare yourself for the sometimes unpredictable journey.

I was fortunate to have a chance encounter with one of the Co-Founders of Deep Eddy Sweet Tea Vodka, Gary Crowell. Gary soon became a partner and was instrumental in sharing his expertise. Flash forward to today, even though we are in the middle of the COVID-19 global pandemic we are bottling our first batches of Rock Sound® Rum and launching the brand. We thought about delaying the launch but launching during the pandemic felt like the perfect game changing move. While most brands are not launching new products or are being conservative, we are pushing forward with our product which is a popular spirit with natural ingredients and premium flavors. My wife, now CEO, and I, along with a couple of other experienced business partners, including Gary Crowell, are a great team dedicated to making this dream a reality no matter what!

Interested in learning more about Rock Sound® Rum or grabbing your very own summer vacation in a bottle?

Austinites can find Rock Sound® Rum in select liquor stores now, and will soon find the brand behind the bar at some of the city’s favorite watering holes. The brand was recently picked up by Republic National Distributing Company (RNDC) and will be distributed statewide throughout Texas in the months to come and nationwide after that.   Stay up to date:

For more information on the Jack Welch Management Institute, visit us.

When It Comes to Leadership Training, Don’t Pay Lip Service

‘Rank-and-Yank’? That’s Not How It’s Done

JWMI In the news